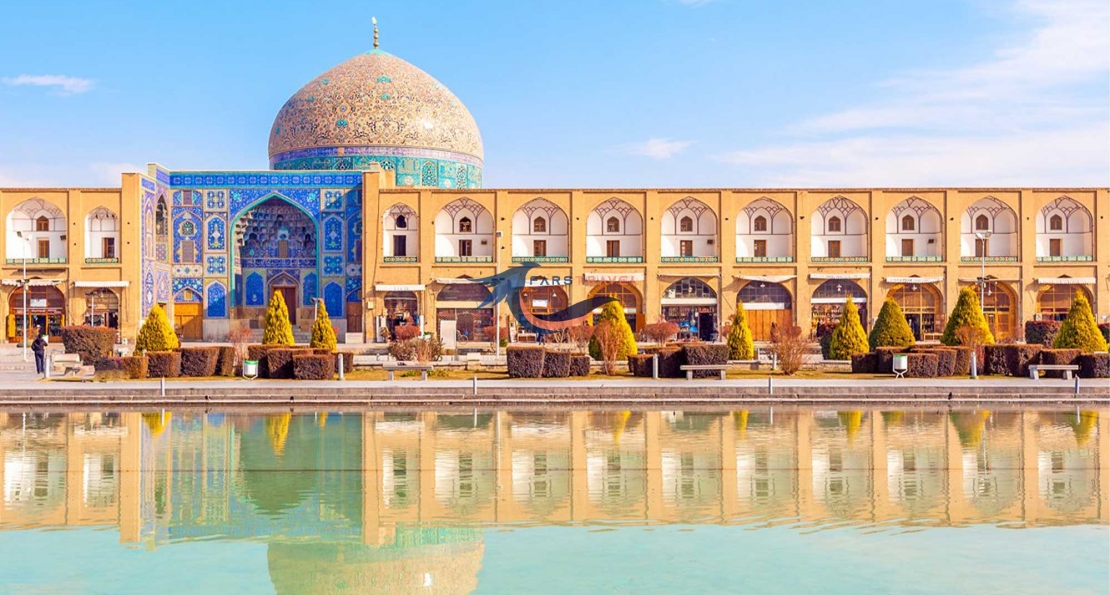 Naqsh-e Jahan Square, or Meidan-e Emam (also Shah Square and Imam Square), is the main tourist spot of Isfahan, one of the UNESCO World Heritage Site. This square is the first place to see while visiting Isfahan and it is full of tourists all over the year. Naqsh-e Jahan in Farsi means “The image of the world”. The square is surrounded by structures of different purpose and architecture, and together with the main bazaar of Isfahan they comprise the huge complex to explore.

Naqsh-e Jahan Square was built between 1598 and 1629 by the decision of Shah Abbas. In 1598 Shah decided to move the capital of Persian Empire from Qazvin to Isfahan as a more secure and convenient place. To commemorate the new role of Isfahan and also to create a place to hold national events, Naqsh-e Jahan Square was designed. Shaykh Bahai became the leading architect of the project. Since the politic strategy of Shah Abbas was concentrated on centralizing power structure of Iran, the main idea of the project was to reflect all the components of power. So the square is surrounded by several buildings, where Shah (Imam) Mosque represents the power of the clergy, the Imperial Bazaar represents the power of merchants and Ali Qapu Palace represents the power of Shah. Naqsh-e Jahan Square is 160 meters wide by 560 meters long, which results in a total area of 89,600 square meters. It is surrounded by two-story row of shops, reflecting architecture style of Safavid Era. During the day the square was a place for trade, full of sellers’ tents. On evenings, when the sound of bargain vanished, the square turned into entertainment site with jugglers, acrobats, dervishes and curious citizens. Other events, such as Nowruz or polo matches were also held on the square.

Naqsh-e Jahan Square is located in the very center of Isfahan, surrounded by many other attractions. The north end if the square through Qeisarie Gates turns to the Imperial Bazaar – the main bazaar of Isfahan. On the south from the square, there is majestic Shah (Imam) Mosque located. In walking distance from the square, there are Shah Historical Bath, Chehel Sotoon Palace, and Hasht Behesht Palace. After 20 minutes’ walk, you will reach Si-o-Se Bridge.

What to Do at Naqsh-e Jahan Square

Besides having four amazing structures around it to visit, the square itself is an attraction. This is one of the biggest squares of the world, filled with fountains and green lawns, souvenirs shops and ice-cream places. You can take a horse-ride around the square or enjoy a walk in a sunset light. Ali Qapu Palace – the residence of Shah Abbas, and two mosques – Sheikh Lotfollah Mosque and Shah (Imam) Mosque are open to visitors to enjoy. Through Qeisarie Gate you can enter Bazaar and have a lunch in one of the traditional restaurants.

How To Get To Naqsh-e Jahan Square

If you are driving, there is a parking on Ostandari Street, next to the western wall of the square, and on the eastern side of Shah Mosque.

You can take a walk from Hasht Behesht Palace and Chehel Sotoun Palace, Si-o-Se-Pol, Bazaar or Historical Bath - all of them are located within walking distance of each other.

If you are staying far from city center or coming from airport or bus station, the closest metro station is Takhti. It is located in 20 minutes walking distance from the square.

If you want to use the bus to get to the square, choose a bus passing one of those two stops - Central Library and Khorshid Hospital.
Naqsh-e Jahan Square Offices
Support is currently
Open
Official support hours:
Sunday - Saturday / 12:00AM - 11:59PM (Asia/Tehran, GMT +4.5)
Your Time:
Sun,
Our Time:
Sun,