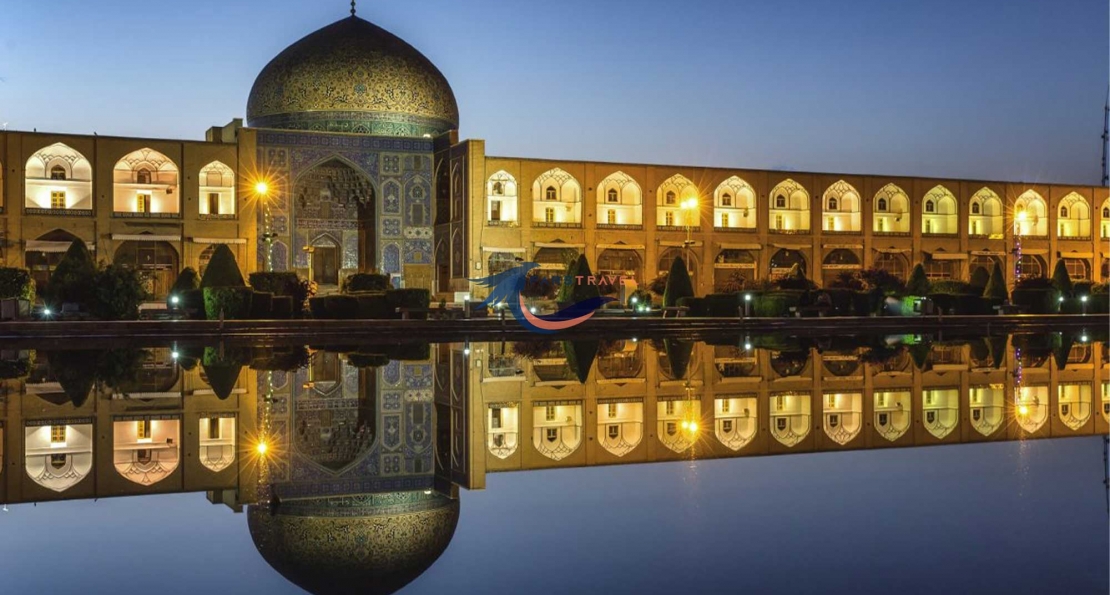 Sheikh Lotfollah Mosque is a famous masterpiece of Iranian architecture, standing on the eastern side of Naqsh-e Jahan Square, the first built of the four monuments of the square. The mixture of modest shape and rich interior and exterior tile ornaments made the mosque one of the most recognizable tourist sites of Isfahan.

Sheikh Lotfollah was built between 1603 and 1619 as a part of Naqsh-e Jahan Square complex by decision of Shah Abbas. Since Ali Qapu Palace, located on the west side of the square, was a residence of the Shah and his family, the complex needed a mosque that would be appropriate for the Shah to pray and also comply with the beauty and majesty of the square. Unlike the Imam Mosque, which was designed for public praying, Sheikh Lotfollah Mosque was the private mosque for the family of Shah Abbas. The doors of the mosque were always closed and guarded, so ordinary people could admire the mosque only after centuries. To avoid being seen while crossing the square from Ali Qapu Palace to the mosque, Shah and his wives used a tunnel under the square.

Due to the fact that Sheikh Lotfollah Mosque was designed to be a private mosque, it is smaller than Imam Mosque, and has no minarets. Naqsh-e Jahan Square, in contrast with the most important structures in Iran, does not follow the direction of Mecca, so Shaykh Bahai, the chief architect of the project, faced a challenge while designing two mosques of the square. Like Imam Mosque, Sheikh Lotfollah Mosque has an entrance portal that turns right, forcing the visitor to face the direction of Mecca when entering the mosque. The paintings and interior tiles were made by Reza Abbasi, famous Iranian artist, and its quality and beauty overcome exceed anything created In Iran before. The walls, dome, entrances of the mosque are decorated with the so-called seven-color tiles, calligraphy, inscriptions of some chapters from Quran, names of Imams, and poetry.

Sheikh Lotfollah Mosque stands in the eastern part of Naqsh-e Jahan Square, which is located in the very center of Isfahan, surrounded by many other attractions. The north end if the square through Qeisarie Gate turns to the Imperial Bazaar – the main bazaar of Isfahan. On the southern side of the square, there is a majestic Shah Mosque located. In walking distance from the square, there are Shah Historical Bath, Chehel Sotoon Palace, and Hasht Behesht Palace. After 20 minutes’ walk, you will reach Si-o-Se Bridge.

When to Visit Sheikh Lotfollah Mosque

The opening hours of the mosque are based on the praying schedule. So you can enter Sheikh Lotfollah Mosque from 9.00 till 11.30 and from 13.00 till 16.00 in winter, from 9.00 till 12.30 and from 14.00 till 18.00 in summer. After visiting the mosque take a walk around Naqsh-e Jahan Square. It is believed that the best time to visit the square is evening when the sunset light caresses the domes of the square.

How To Get To Sheikh Lotfollah Mosque

You can take a walk from Hasht Behesht Palace and Chehel Sotoon Palace, Si-o-Se-Pol, Bazaar or Historical Bath - all of them are located within walking distance of each other.

If you are staying far from city center or coming from airport or bus station, the closest metro station is Takhti. It is located in 20 minutes walking from the mosque.

If you want to use the bus to get to the mosque, choose a bus passing one of these two stops - Central Library and Khorshid Hospital.

If you are driving, there is a parking on Ostandari Street, next to the west wall of the square, and on the east from Shah Mosque.
Sheikh Lotfollah Mosque Offices
Support is currently
Open
Official support hours:
Sunday - Saturday
9:00AM - 6:00PM & 12:30PM - 2:00PM (Asia/Tehran, GMT +4.5)
Your Time:
Wed,
Our Time:
Wed,