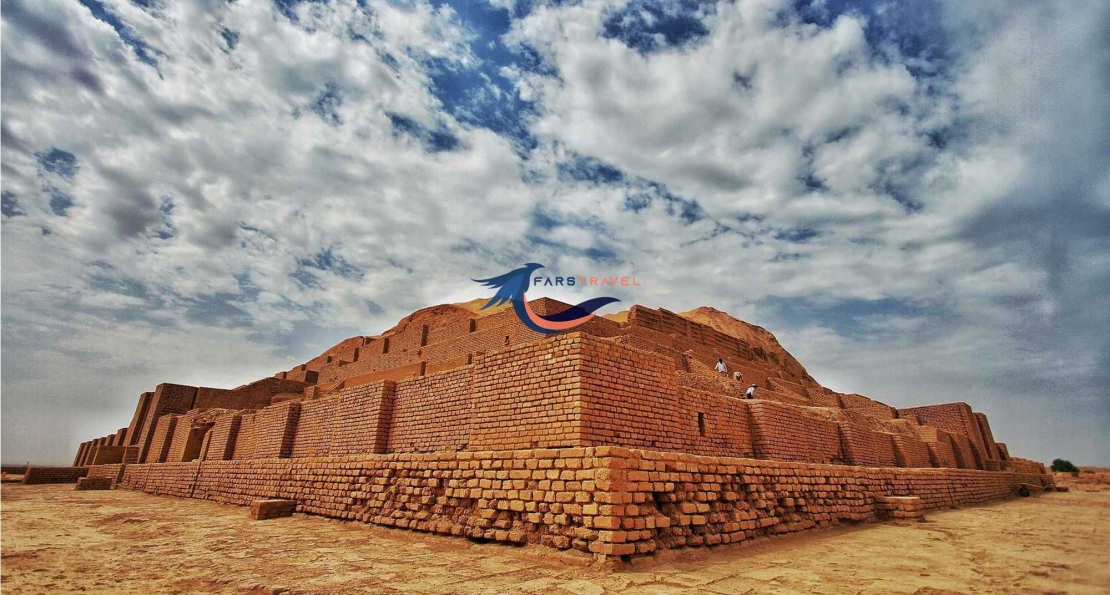 The ruins of the holy city of the Kingdom of Elam, surrounded by three huge concentric walls, are found at Tchogha Zanbil. Founded c. 1250 B.C., the city remained unfinished after it was invaded by Ashurbanipal, as shown by the thousands of unused bricks left at the site.

Located in ancient Elam (today Khuzestan province in southwest Iran), Tchogha Zanbil (Dur-Untash, or City of Untash, in Elamite) was founded by the Elamite king Untash-Napirisha (1275-1240 BCE) as the religious centre of Elam. The principal element of this complex is an enormous ziggurat dedicated to the Elamite divinities Inshushinak and Napirisha. It is the largest ziggurat outside of Mesopotamia and the best preserved of this type of stepped pyramidal monument. The archaeological site of Tchogha Zanbil is an exceptional expression of the culture, beliefs, and ritual traditions of one of the oldest indigenous peoples of Iran. Our knowledge of the architectural development of the middle Elamite period (1400-1100 BCE) comes from the ruins of Tchogha Zanbil and of the capital city of Susa 38 km to the north-west of the temple).

The archaeological site of Tchogha Zanbil covers a vast, arid plateau overlooking the rich valley of the river Ab-e Diz and its forests. A “sacred city” for the king’s residence, it was never completed and only a few priests lived there until it was destroyed by the Assyrian king Ashurbanipal about 640 BCE. The complex was protected by three concentric enclosure walls: an outer wall about 4 km in circumference enclosing a vast complex of residences and the royal quarter, where three monumental palaces have been unearthed (one is considered a tomb-palace that covers the remains of underground baked-brick structures containing the burials of the royal family); a second wall protecting the temples (Temenus); and the innermost wall enclosing the focal point of the ensemble, the ziggurat.

The ziggurat originally measured 105.2 m on each side and about 53 m in height, in five levels, and was crowned with a temple. Mud brick was the basic material of the whole ensemble. The ziggurat was given a facing of baked bricks, a number of which have cuneiform characters giving the names of deities in the Elamite and Akkadian languages. Though the ziggurat now stands only 24.75 m high, less than half its estimated original height, its state of preservation is unsurpassed. Studies of the ziggurat and the rest of the archaeological site of Tchogha Zanbil containing other temples, residences, tomb-palaces, and water reservoirs have made an important contribution to our knowledge about the architecture of this period of the Elamites, whose ancient culture persisted into the emerging Achaemenid (First Persian) Empire, which changed the face of the civilised world at that time.

Criterion (iii): The ruins of Susa and of Tchogha Zanbil are the sole testimonies to the architectural development of the middle Elamite period (1400-1100 BCE).

Criterion (iv): The ziggurat at Tchogha Zanbil remains to this day the best preserved monument of this type and the largest outside of Mesopotamia.

Within the boundaries of the property are located all the elements and components necessary to express the Outstanding Universal Value of the property, including, among others, the concentric walls, the royal quarter, the temples, various dependencies, and the ziggurat. Almost none of the various architectural elements and spaces has been removed or suffered major damage. The integrity of the landscape and lifestyle of the indigenous communities has largely been protected due to being away from urban areas.

Identified threats to the integrity of the property include heavy rainfalls, which can have a damaging effect on exposed mud-brick structures; a change in the course of the river Ab-e Diz, which threatens the outer wall; sugar cane cultivation and processing, which have altered traditional land use and increased air and water pollution; and deforestation of the river valleys. Visitors were banned from climbing the ziggurat in 2002, and a lighting system has been installed and guards stationed at the site to protect it from illegal excavations.

The historical monuments of the archaeological site of Tchogha Zanbil are authentic in terms of their forms and design, materials and substance, and locations and setting. Several conservation measures have been undertaken since the original excavations of the site between 1946 and 1962, but they have not usually disturbed its historical authenticity.

Tchogha Zanbil was registered in the national list of Iranian monuments as item no. 895 on 26 January 1970. Relevant national laws and regulations concerning the property include the National Heritage Protection Law (1930, updated 1998) and the 1980 Legal bill on preventing clandestine diggings and illegal excavations. The inscribed World Heritage property, which is owned by the Government of Iran, and its buffer zone are administered by the Iranian Cultural Heritage, Handicrafts and Tourism Organization (which is administered and funded by the Government of Iran). A Management Plan was prepared in 2003 and has since been implemented. Planning for tourism management, landscaping, and emergency evacuation for the property has been accomplished and implementation was in progress in 2013. A research centre has undertaken daily, monthly, and annual monitoring of the property since 1998. Financial resources for Tchogha Zanbil are provided through national budgets.

Conservation activities have been undertaken within a general framework, including development of scientific research programs; comprehensive conservation of the property and its natural-historical context; expansion of the conservation program to the surrounding environment; concentration on engaging the public and governmental organizations and agencies; and according special attention to programs for training and presentation (with the aim of developing cultural tourism) based on sustainable development. Objectives include research programs and promotion of a conservation management culture; scientific and comprehensive conservation of the property and surrounding area; and development of training and introductory programmes.

Sustaining the Outstanding Universal Value of the property over time will require creating a transparent and regular funding system, employing efficient and sustainable management systems, supporting continuous protection and presentation, enjoying the public support and giving life to the property, adopting a “minimum intervention” approach, and respecting the integrity and authenticity of the property and its surrounding environment. In addition, any outstanding recommendations of past expert missions to the property should be addressed.
Chogha Zanbil Offices
Support is currently
Close
Official support hours:
Sunday - Saturday / 7:30AM - 7:00PM (Asia/Tehran, GMT +4.5)
Your Time:
Tue,
Our Time:
Tue,