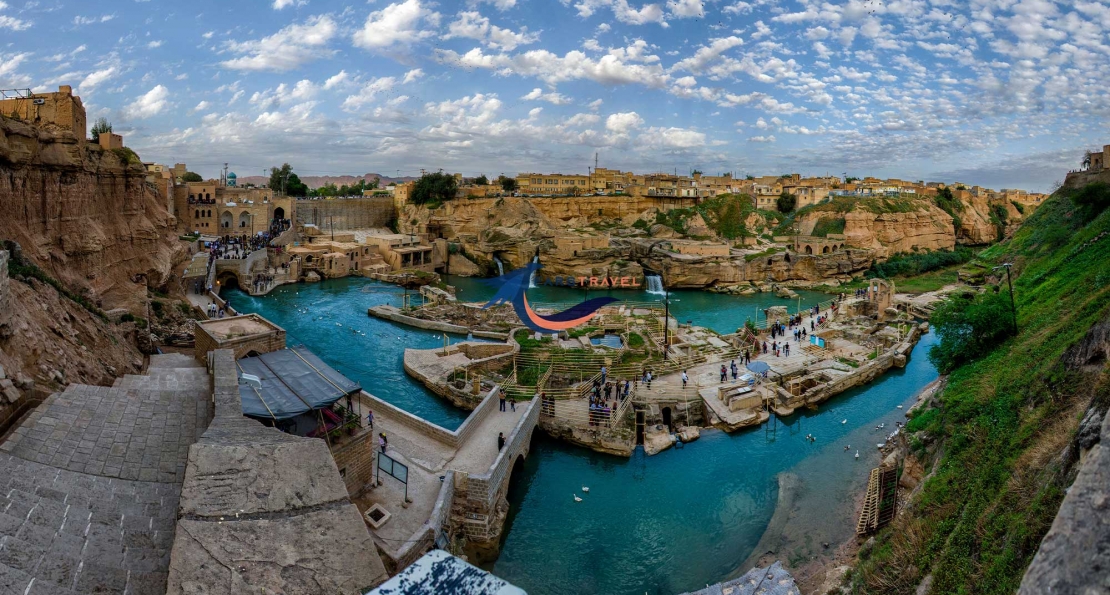 Inscribed on UNESCO World Heritage list in 2009 as a ‘masterpiece of creative genius’, the Shushtar Historical Hydraulic System in southwest Iran is a destination for history buffs, nature lovers and travelers who eyewitness how the prehistoric yet homogeneous hydraulic system works.

Shushtar is a city in Khuzestan province, southwest of Iran. It’s situated at the foot of Zagros Mountains, about 90 km north of Ahvaz. In most historical periods from Sassanid to Pahlavi, this city was the capital of Khuzestan province. Shushtar owes much of its fame to the historical hydraulic system located there. This system has been registered in UNESCO’s List as a tangible cultural heritage site in 2009, referred to “as a masterpiece of creative genius.”

Shushtar historical hydraulic system is an interconnected set of bridges, weirs and dams, mills, water cascades, canals, and tunnels. Jane Dieulafoy, the famous French archeologist, in an account of her travels, has referred to this site as the largest industrial complex before the Industrial Revolution.

Karun, the only navigable river of Iran, is divided into two branches before entering Shushtar, called Gargar and Shatit. Gargar is an artificial watercourse which its construction is attributed to Ardeshir I, the founder of the Sassanid Empire. In the Sassanid period, Gargar weir was built on this canal to bring up the water level.

Three tunnels lead the water provided by Gargar weir into the complex. The entering water is divided up through numerous canals, turns the mill wheels, and then, falls into a basin in form of water cascades. They create an amazing and fascinating view in your eyes. Shushtar historical hydraulic system is one of the masterpieces of civil engineering in the world.

The Sassanids used the ancient water treatment techniques to share the water provided by Karun between different areas of Shushtar and even some other nearby cities. Parts of this hydraulic system are still working even after centuries. The constructional materials used in this complex have been mainly granite and a plaster of lime and mortar.

Structures Making up the Complex

The followings are the remarkable structures you can enjoy visiting:
Dating back to the Sassanid period, it’s been the core structure of Shushtar historical hydraulic system with 44 floodgates. Only 37 of these floodgates have remained intact up to the present. It’s approximately 500 m long, and about 50% of it has been rebuilt and restored. It’s been the first combined bridge-dam structure in Iran.

In early 260 A.D., Shapur I, the second king of Sassanid Empire, achieved a great victory against the Romans. He arrested Valerian I, the Roman emperor, and captured the Roman soldiers. Shapur made use of the Romans in the way of construction and prosperity of Shushtar, and specifically the construction of this weir. That’s why it’s also called Caesar weir.
It’s been the operation center of the complex consisting of large and numerous yards, barracks, stables, bathhouses, watchtowers, gardens, an armory, timpani rooms, a harem, a kitchen, large pools, fortifications, and a moat. It was a defensive center as well as a control center of Daryun canal, another artificial watercourse which is a sub-branch of Shatit.

Today, the castle is mainly destroyed, and the only remains are underground rooms and Daryun tunnels. According to historical resources, it dates back to the Achaemenid period. Daryun canal was dug during the reign of Darius the Great in order to water Mianab plain in Shushtar.
Attributed to Shapur I, it divides Karun into two branches, Shatit and Gargar, in certain ratios. The water treatment technique implemented in this weir makes it an architectural masterpiece of ancient times in Iran. It means, while dividing Karun, if the amount of water in each one of these two canals is going to exceed a certain limit, the weir will transfer the extra amount of water to the other canal.
It also dates back to the Sassanid period and has been made of an integrated bedrock. The manipulation of the bedrock and building three walls in the middle of it has been done in order to increase water pressure and keep the water level up.
It’s located next to one of the six historical gates of Shushtar called Lashkar. Today, you can see just the remains of this gate. This combined structure dates back to the Sassanid period but during its restoration in 2009, two Parthian graves were discovered near the base of this bridge. The canal passing under the bridge is a sub-branch of Daryun. It pours into Gargar and is called Raghat.
This Sassanid structure transfers the water from Daryun canal to Raghat canal. It was particularly useful at the time of Daryun overflowing when the flood was a threat to Mianab Plain.
It’s been built on Raghat canal in an east-west direction in Sassanid period. On the southern side, it leads to a part of the city fortification.
It’s been located on the course of Gargar canal, downstream of the water cascades, during Sassanid period.
It’s been constructed on Daryun canal and dates back to Safavid period.
The remains of an octagonal tower alongside Shatit canal. It’s been build on a hill overlooking Mizan weir. It’s a kind of watchtower dating back to the Qajar period.
It consists of 32 water mills and numerous eye-catching water cascades all of which dating back to Sassanid period.
With more than 200 steps, it’s located in the south of the water cascades area, connecting them to the residential areas overlooking the complex. The stairway bears some inscriptions which demonstrate its history.

The ancient water treatment techniques used in Shushtar historical hydraulic system is something unique you can hardly find anywhere else. It draws so many visitors and archaeologists to the area from all over the world. You can also be one of these visitors enjoying and admiring this civil engineering masterpiece.
Shushtar Hydraulic Water System Offices
Support is currently
Close
Official support hours:
Sunday - Saturday / 8:00AM - 7:00PM (Asia/Tehran, GMT +4.5)
Your Time:
Tue,
Our Time:
Tue,