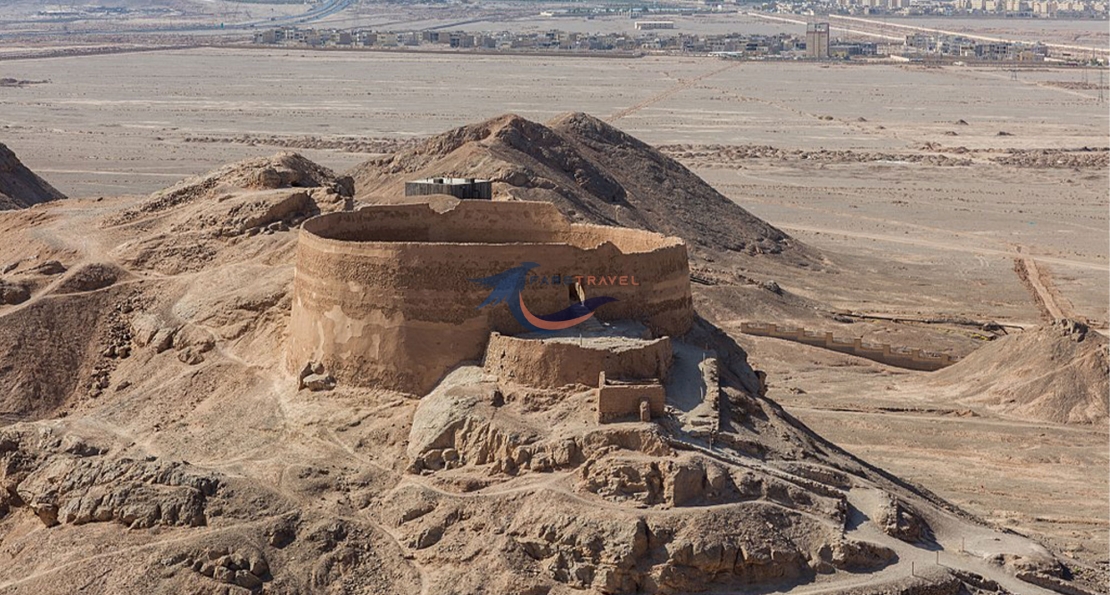 It is probably one the scariest tourist attractions of Yazd! But don’t worry, there is nothing to be scared of. This place is more interesting than horrifying. Zoroastrian’s Dakhmeh or Towers of silence is a place where Zoroastrian people used to place their deceased. Let’s read more about this mysterious place. So, try not to faint and welcome to the realm of the dead …

What is a Dakhmeh (Towers of silence)

First of all, let’s see what is a Dakhmeh or Towers of Silence? Basically, it is a cemetery for Zoroastrian’s people but with a slight difference. Based on Zoroastrian’s beliefs, human remaining is unclean. Also, they consider soil as a holy element, so no human shall be buried because the soil will be polluted. So, instead of putting the corpse into the soil (here it comes the scary part), they put them for predators and birds (usually vultures) to feed on them! Now you know why they built towers of silence in height. It is worth to mention that in Zoroastrian’s religious strongly condemns mourning for the dead. This unusual ceremony has more than 3000 years’ dates. Zoroastrian corpse or “Nasu” were transferred by people named Nesakesh from home to the Dakhmeh. After delivering Nasu to Dakhmeh officials, the corpse was exposed to the sun and birds until only the bones are left. After this weird purification, there is a person in there who was never allowed to leave the Dakhmeh, putting the remaining bones into the “Ostudan” (Ossuary) in the middle of the Dakhmeh. The way that the corpse was arranged is interesting too. They were placed in circles, men in the outermost layer, women in between, and finally children in the center. It is worth to mention that all ceremonies in Dakhmeh were stopped since the 70s.

Dakhmehs were either built by humans or are naturally-created features of the Earth. What is common between them is that they should have easy access for predators and they are outside the cities and villages. Thus, they don’t have any roof. They usually have a stone cylinder-shaped tower. In the Iranian Zoroastrian tradition, the towers were built in top of hills or low mountains in desert locations distant from population centers. Among Zoroastrian’s Dakhmeh two of them are more famous. First Mankeji Hutria Dakhmeh that is belonged to an Indian Zoroastrian and the second is Golestan Dakhmeh from Qajar Dynasty.

Zoroastrian’s Dakhmeh or Towers of silence is a little far from the city center but there are other old buildings, including a Badgir (windcatcher) that you might find interesting. Other tourist attractions in the Yazd are Dolat Abad Garden, Museum of Mirrors and Lighting, Amir Chakhmaq Complex, and Zoroastrian Fire Temple.

Find Isar Sq. in the southeast of Yazd. Zoroastrian's Dakhmeh is in the boulevard that connects this square to the Emam Hadi Blvd.